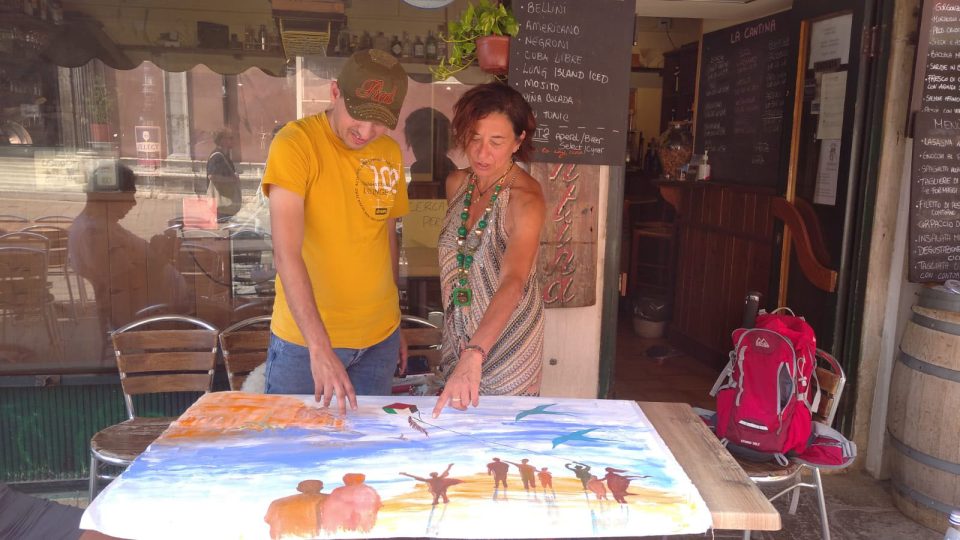 Palazzo Mora hosts the Collateral Event of the 59. Biennale Arte, From Palestine with Art, realised in close collaboration with the Palestine Museum US.
Since 6 August, a new work has been added, a four-handed work by two artists, the Italian Solveig Cogliani and the Palestinian, Mohammed Alhaj, who came especially from Gaza. The two artists put their hands to work on a single canvas to symbolically build a first piece of a Human Bridge – a larger project – capable of bearing witness to the values of peace for the peoples bordering the Mediterranean Sea.
This is how Solveig Cogliani talks about the work: “It is necessary – even more so today – to talk about ‘Mediterraneanity’, that is, a unitary space, a whole, where the fractures of today and yesterday can be annihilated, without obviously annulling the specificities of the peoples who live on it. The Mediterranean has faced modernity late and has not known secularity along all its shores, but elaborating an alternative Mediterranean culture is possible by rethinking relationships of proximity and distance, symmetries and asymmetries”.

FROM PALESTINE WITH ART