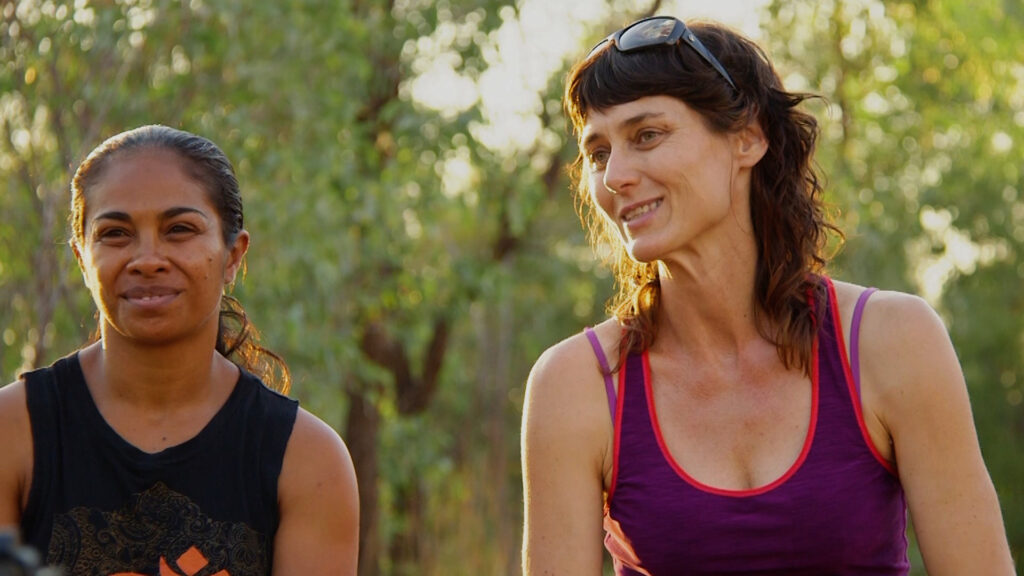 From the aboriginal lands of Australia the Marrugeku company arrives in Venice with Jurrungu Ngan-ga – Straight Talk for Wayne McGregor’s Biennale Danza. We met with co-directors and choreographers Dalisa Pigram and Rachael Swain.

Aboriginal Australians may not have a written literature, but they do have a very rich mythology and a complex oral tradition focusing on the creation of the world, the veneration of Earth, and respect for its creatures. It all comes together beautifully in the Dreamtime and Songline series, which are often accompanied by instruments like the typical didgeridoo. Before the British invasion, over 400 languages were spoken in Australia. The Rainbow Serpent, who lives in the Milky Way as well as in Australian riverbeds, could not same them from hundreds of years of subjugation, land theft, jailing, and kidnapping of children to raise them into white culture. Only in 2008 did the Australian Government formally apologize for the so-called ‘stolen generation’.
The Marrugeku group started here to nurture a renaissance of aboriginal history and culture, languages and rites. The company’s dance performances aim at preserving the past to create a new present. They mix ritual dances and urban dance and aim at easing the fear for what’s different, especially culturally. They raise feelings of sadness and rage, resilience and joy. In Venice, we will be able to see Jurrungu Ngan-ga – Straight Talk, a complex act that on one side benefits from the cooperation of many artists of different extractions, and on the other side, comprises an explicit reference and heartfelt gratitude to the elders of the villages for their know-how and memories. We interviewed the two founders of Marrugeku, Dalisa Pigram and Rachael Swain. The two have been working together since 1994 and created and promoted Marrugeku’s productions and workshops, thus popularizing in the Australian and international audience the cultural heritage of aboriginal Australians thanks to a compelling experience of inter-cultural performance.

Jurrungu Ngan-ga is an installation, a dance, a piece of choreography that speaks of reclusion, separation, annihilation of the other. Can the public infer a narration from it? Or is the show limited to just hit us emotionally?
R.S. Marrugeku has been working for many years to develop a co-devising choreographic process with the dancers producing a gestural dance that we understand as a reclaiming of emotional expressionism in dance. This is a neo-expressionism that is also cultural and political. It ‘works’ in ways that resonate with ‘response-ability’ in Indigenous dance. It engages the view in the implications of the dance and the liveness of the moment and its specific place and time. But we also draw on European dance theatre and its post war histories as well as the lineage from Pina Bausch. These all give us the capacity to work with dancers to express their own soties, cultures and embodied trainings in performance and share this with audiences. We work carefully on the dramaturgy, the sound design and the lighting design to ‘curate’ the audiences experience of the feelings and the ideas and the politics so we can facilitate their experiences of feeling and knowing and also of not knowing or being in a learning space. All this is a long way of saying that we are working with all the layers that theatre and dance can offer in different ways at different points in the show.

The show’s choreography is articulated and complex – a harmonious mix of urban and folk dance. Can you tell us more about how the show came to be and how did the dancer contribute to its making?
D.P. Creating a show like Jurrungu Ngan-ga requires collaboration with an amazing group of artists who were willing to undergo a task-based process where their individual movement disciplines and experience, their diverse cultural backgrounds and their personal political stances on injustice were fully engaged to generate the raw choreographic material. The complexity you see in the choreography is made up of this diversity but also of the collective resilience and strength that the cast share. Some of the casts were invited to collaborate on this production due to their long or existing relationship with the company and others have joined us for the first time to create this piece and came highly recommended. We see many of these artists as leaders in their own practice and artforms and artists who bring their lived experience to lend their voice to the voiceless. Our process includes sharing tasks which may speak directly to the central ideas of Jurrungu Ngan-ga like ‘fear of cultural difference’ and other tasks might be more to search for the missing choreographic quality like ‘bubbles under the surface’ or ‘champagne bubbles’. The dancer contributed their own responses drawing from their movement training, cultural background and generally their experience and knowledge of the subject matter to co-create the performance.

The name Marrugeku seems to refer to an experienced man, a wise man that can counsel and heal. The show Cut the Sky, on climate risks, is an example. Does your Company have an explicit, or shared, statement of mission?
R.S. Our mission statement is: “Marrugeku pursues powerful new forms of cultural knowledge and the survival, preservation and growth of Indigenous story, dance and language through the making of new intercultural performance. We are committed to working within and creating from the values, responsibilities and cultural authority of specific Indigenous cultural frameworks which form the basis of each project. In this way we approach subjects like climate change or incarceration from the perspectives of the local Indigenous custodians and work as artists from many backgrounds to respectfully interpret the way of knowing through art in order to speak of both local and wider global issues. We believe in art as a power for change that can cross many borders, often faster and more directly than government policy. Our works through remote Indigenous communities, into the homelands of other First Peoples internationally and around Australia and the world to the lands of other former colonisers. We work through art as a knowledge sharing but also to empower the artists within the company to go back and work in their own communities.”

The Yawuru language has been reintroduced in the areas of ancestral use, and schoolchildren today learn once-forgotten names of plants and animals. Does anything like what takes place in Banglatown, London, happen? All the while the Bengali community gains official recognition, younger, integrated Bengalis leave the community? In other words, can a desire for integration cancel out the need to keep national and traditional identities alive?
D.P. Here in the town of Broome which sits in Yawuru Country, Indigenous languages of the region including Yawuru were impacted significantly by past policies of assimilation and what is known as the Stolen Generation where children were forcibly removed from their families, severing ties also to their Country, language and culture which has also impacted generations to follow. Revitalisation of our languages and successful Native Title claims over our country have helped reconnect Yawuru people back to our Country and gives us a voice to have a say in what happens within our Country which we have been the cultural custodians for since the beginning of time. Young people are at risk of disconnecting due more to social issues brought on as a by product of the policies mentioned earlier but the focus on connecting youth to culture and Country is key for our Yawuru community to help develop their sense of responsibility and pride and a sense of identity and belonging. Broome has been home to many Indigenous language groups as well as Asian groups like Japanese, Chinese, Malay and Filipino and although forbidden in the times of policies, interracial marriages exist. Broome’s cultural identity is unique due to this and is an example of the cultural make up which could have existed across Australia had the White Australia Policy not existed. This policy didn’t apply to Broome and the Torres Strait Islands because of the Pearling industry and the need for Asian pearl divers. These families have a unique resilience and pride and with deep connections to Indigenous language groups of the region I think the desire to hold on to our local identity is strongly enforced.

In 1968, anthropologist W.E.H. Stanner coined the term “The Great Australian Silence”, maintaining there was a kind of ‘cult of oblivion’, a tendency to forget the history of fighting between European colonists and indigenous populations, which were to be confined at the margins of national history. Will Marrukegu follow Stanner’s path or is it much different?
R.S. Stanner’s great statement reverberates through much of what we tackle in our art making. For non-Indigenous Australians it is the lack of knowing and the lack of preparedness to understand that we don’t know that Marrugeku’s work addresses. We want to disrupt that silence and full it with nation specific knowledges, truth talking about our history and contemporary experience, joy, sadness and power so that it is no longer a silence, or a gap, but a rich, complex process of engaging with the work of being an Australian in the here and now. And that is a here and now that is also connected to the past and future.

One of the pillars of local culture is the negation of private property of land, hence a different concept of ecology and preservation of nature. Today, unthinkable disaster takes place every day, as happens in the Amazon. How do you work on this topic in what you do professionally?
D.P. Much of our work and many of our projects explore our relationship with Country (land) from both non-Indigenous and Indigenous perspectives. As a Yawuru/Bardi woman I understand that I have responsibilities from birth to care for Country and maintaining a healthy ecology. Country is like family. This care and sense of responsibility comes from the passing on a deep knowledge of all things connected and the balance that needs to be kept from generation to generation. Our local and national concerns on the care for Country and respect and value of Indigenous knowledge and experience and how to manage and maintain healthy environments has been in focus since colonization for Indigenous people. We have seen our traditional lands and waters ripped apart, dug up, blown up, exploited to benefit economy without thought to the stories that live in the land and environments and the long-term impact. We have dedicated projects such as our Listening To Country laboratory which immersed artists in exploring choreographic processes that are connected to specific places within the Kimberley region and from this we then created the production Cut The Sky which explores what happens when you don’t listen to Country. This production was made while locally we were dealing with the threat of massive industrialization in the region due to a proposed gas hub being built north of Broome in a pristine environment with significant cultural importance at Walmadany also known as James Prices Point. There are many examples of this nature that are very close to home and it is impossible to ignore. Rachael and I both acknowledge our connections and relationships to Country in our collaborative processes to identify where the work is needed in local and global conversations and share what we think Indigenous knowledge systems can teach us all how to keep balance and co-exist together.