Vision of a vision

Titian's The Assumption unveiled after extraordinary restoration
by Mariachiara Marzari 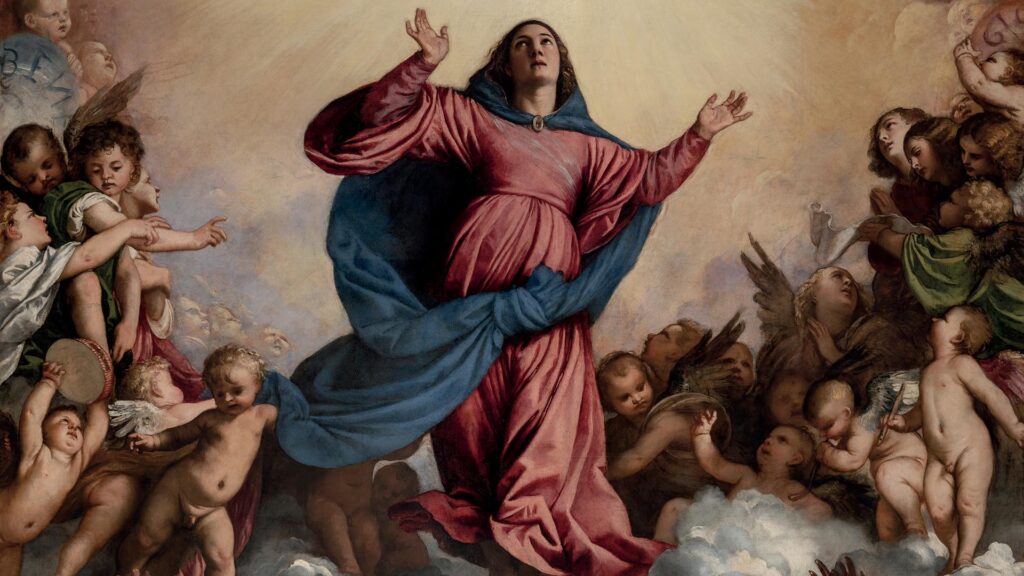 After a four-year restoration campaign, Titian’s altarpiece The Assumption, housed in the Frari Basilica, has been unveiled to the world. Titian’s masterpiece underwent a radical intervention whose primary objective was to secure the site, the painting and the surrounding stone frame.

The Frari compound is one of the most important and vital religious and monastic centres in Venice. It is unofficially called Ca’ Granda for its size: the Basilica is 334 feet long, 157 feet wide, and 92 feet tall. The Frari – or friars – are Franciscans, who have been in Venice since 1220. Their first home was much more humble than this, it was given to them by the state around the year 1230. The community grew so much and so quickly, though, that around 1250 it needed a larger church, both for themselves and for their growing pastoral community. The building we see now is the third instalment of a Franciscan Basilica, and its construction began in 1330. Gothic in style, its building was financed by wealthy Venetian families and by voluntary contributions by churchgoers. The consecration took place in 1492 in the name of the Assumption of the Virgin Mary: Santa Maria Gloriosa dei Frari. The Basilica boasts a solemn interior, rich in art masterpieces. Dominating the collection is Titian’s Assumption. The large altarpiece, framed in marble, encompasses the presbytery, and has been for over five hundred years the protagonists of all functions that took place here, as well as inspiring page after page of art and theological critique. On October 4, Saint Francis’ Day, Monseigneur Francesco Moraglia headed the celebration for the restoration of the altarpiece, which we owe to the contributions made by Save Venice.
We discussed the art and its restoration with the restoration team director Giulio Manieri Elia.

The restoration
It has been a very labour-intensive restoration. Basically, we have been taking care of Titian’s Assumption for ten years, first with its upkeep, then with its actual restoration. Both have been carried out by Giulio Bono and his team of professionals. The masterpiece is Titian’s larger on wood panel. The artist used tempera and oil paint on the surface of a panel made of twenty silver poplar planks, glued together horizontally edge to edge. It measures 270 by 140 inches and weighs over 1500 pounds. An extraordinary enterprise, that Titian completed in a very short time and at the relatively young age of 25. We believe that all of it is Titian’s own work, and that he carried out the same entirely within the church, given how large and heavy the artwork is.
The composition of the scene is quite complex, not much for the number of figures depicted, but for the articulation of their relative positions. A number of elements are quite clear: Mary’s figure is inscribed in a circle, and the apostles are confined in a square. This precise geometry reinforces a single point of view, which the artist designed in his preparatory sketches. Unfortunately, only one of these sketches remains.
Infrared analysis revealed a very quick and general outline beneath the painted surface, which is typical of Titian. We also know that some figures underwent drastic change over the course of the realization of the painting. Titian’s attention for light is nothing short of incredible, while as far as architectures go, he was less sure, and made multiple corrections. 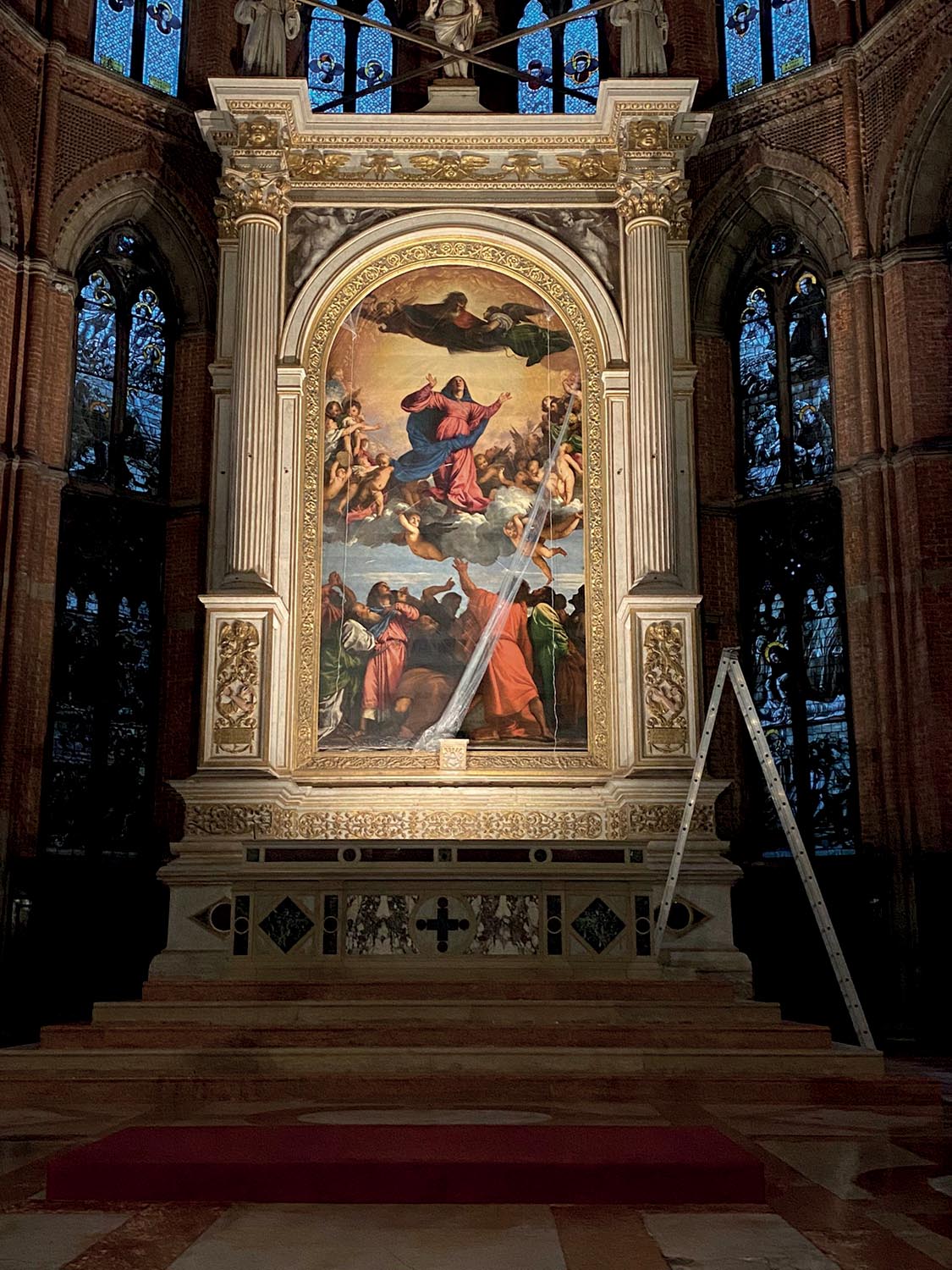 Seeing the artist’s hand
What is great about working on art restoration is that you get to see everything. From very up close, you get to see the whole story of how the painting came to be, you see every detail. Now, consider this restoration took ten years, which speaks volumes of how deeply we studied this piece of art. Yes, we saw Titian’s hand, Titian’s quick, sure, incisive hand in the art he created, and we saw Titian’s actual hand in the prints he left here and there. Certainly, what we learned over ten years will be the subject of an upcoming study.

A revolutionary piece of art
There is no question the Assumption is one of the world’s greatest masterpieces. One of the most impressive peculiarities of this painting is Titian’s choice to do away with any accessory details – the few natural details he added had been subsequently erased, and the composition relies on universal, eternal geometrical shapes. Titian simplified figuration and looked for absolute, pure shapes. The Virgin Mary ascends to the Heavens, almost rotating upwards, extending her arms, while God also open his, and embraces her. Such a powerful image. Also quite powerful, from a psychological point of view, is the apostles’ reaction to the event: they participate each with his own disposition, with different poses and gestures describing different reactions. One of them seems to accompany Mary, with his arms also reaching up, participating to the vertical motion. Colour is also of the utmost importance: Titian chose bright, strong tints, applied in the thinnest of layers onto a priming mixture of plaster and glue. Our restoration reverted them as close to original as possible. Lights and shadows shape every volume, and colour does not merely clothe the figures – it creates them. Technically, we believe that one of the reasons the artist insisted so much on colour is because the large finished piece is backlit, especially in the evening hours. We may argue that this is why Titian used colours so bright on this kind of reflective surface.
As revolutionary as it was, the painting was met with the highest praise soon. We do know it was hard to appreciate back in the days, Giorgio Vasari said as much. By the 1600s, burning candles below had already left dark soot on top of it, which worsened the problem. In the early 1800s, the painting was moved to the Fine Arts Academy for better conservation, and it was brought back to the Basilica only after the First World War. 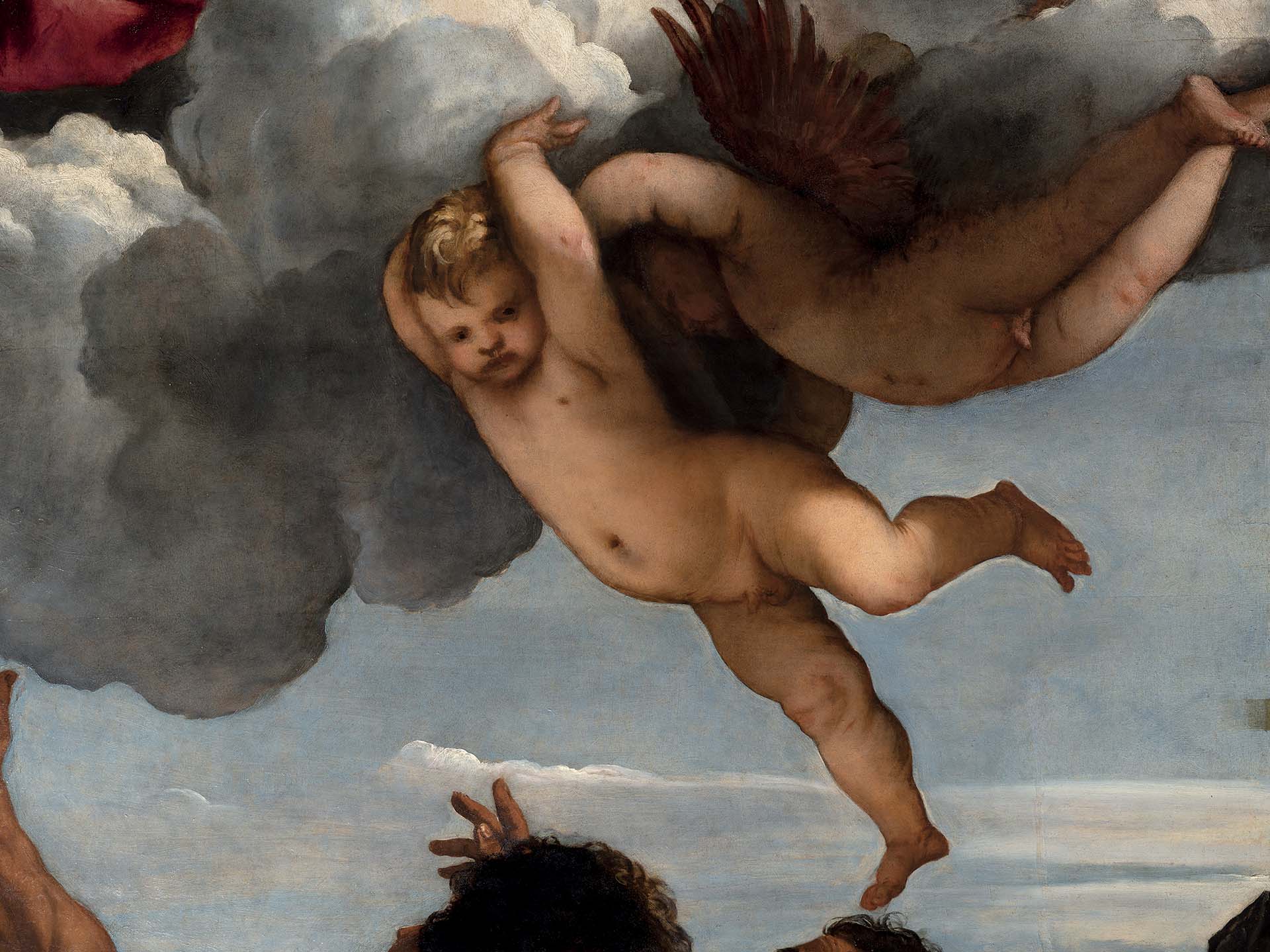 The reasons for the restoration
At one point, the painting was very dirty with dust, and in a few areas, the paint was peeling. The colours were so dull and dirty some elements could not be seen at all, like Mary’s tomb. Also, a large organ had been installed dangerously close to the painting, and its metal supports were anchored on the wood panel itself! The organ’s vibrations, especially the lower notes, were so strong that it was just decided that the organ was to go. It would have also hindered, or downright prevented, any emergency rescue of the painting, should any such situation occur. Woodworms would also migrate from the organ to the painting – a nightmare. The Assumption didn’t survive this long for us to neglect it.

The several restorations carried out
The Assumption had been entirely restored twice – in 1817 and in 1974. There had also been an earlier restoration, of which we know nothing about. Giulio Bono realized as much by analysing the art and concluded it must have been carried out in the 1600s or 1700s. The 1817 intervention was the hardest to work on, as it used a delicate pigment that had long deteriorated. It was decided to eliminate the restoration entirely. The earlier restoration used oil paint, and it was decided to keep it, because any attempt to remove it would have proven too risky.
In 1968, the Istituto Centrale per il Restauro worked on the upkeep of the painting, while in 1974, Francesco Valcanover did. Over the last fifty years, it was kept as is, bar regular cleaning of the marble frame, were soot from the candles would stick. 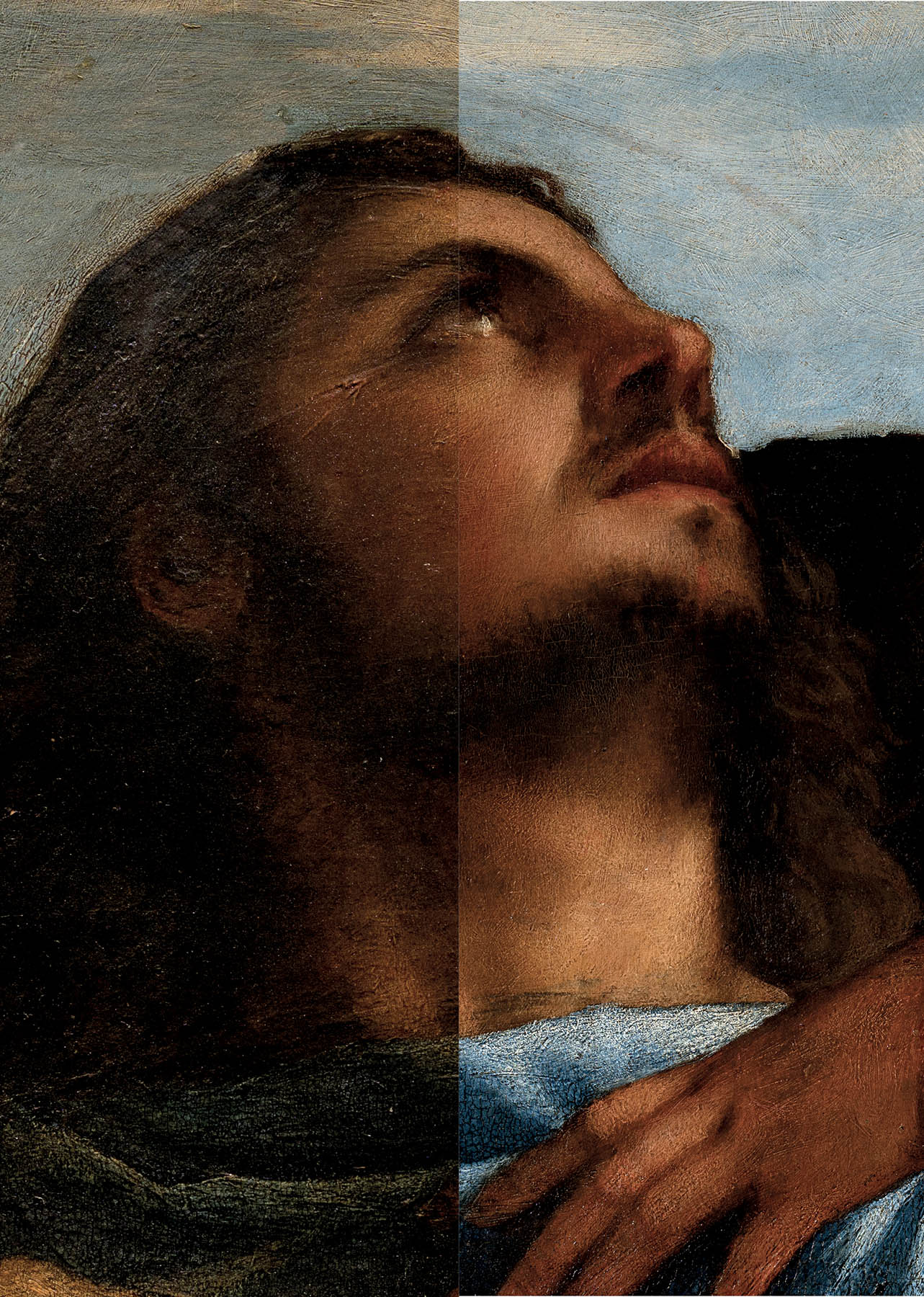 The Assumption in Titian’s career
This painting marks the beginning of Titian’s maturity as an artist. This is his first public piece, visible to anyone, in Venice, the city he chose as his own. Specifically, he painted it for a placed he loved, the Basilica dei Frari, which he would paint a further two pieces for. The Assumption propelled the artist to fame and consolidated his style. It is an experimental piece because it anticipated what he would do next. It contains all elements that will characterize his art from that moment on, and it shows the expressive capabilities of his potential, which will become apparent over the course of his long career. Also of interest is Titian’s attention in the positioning of the artwork within the Basilica. We see it as soon as we step inside, visually framed by the choir and the arch of the niche. This is the reason why the painting displays such an obvious symmetry, because it is the endpoint of our perspective. Lighting also played a key role in Titian’s reasoning: it helps to compare it with the Pesaro Madonna, which is supposed to be looked at askew since it stood on a side wall. On the latter piece, Mary sits sideways. Baroque artists later favoured this pose, but at the time, it had never been seen before.

The Bicentennial, the Frari monument, Titian and The Assumption