A Feast in good health!

21 November in Venice between sacred and profane
by Redazione VeNews 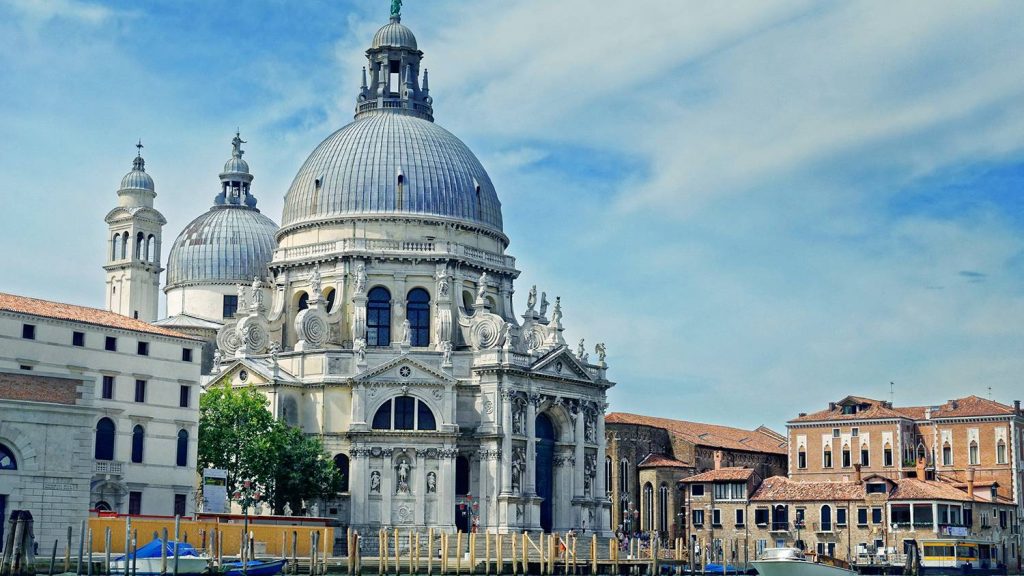 Our Ladyof Good Health, November 21, is a Venetian tradition and it marks, in a way, the entering of the cold season. The tradition in itself is a quite simple one: a procession to the Basilica and a reverence to a depiction of the Madonna, who ended the plague of 1630 in Venice.

An imposingly large staircase seems to rise from the water. Once in, you will see the inside of the double dome construct hovering it. On the top of the larger dome is a statue of the Virgin with the mace of Capitano da Mar (Admiral). Designed by a young Baldassarre Longhena in an innovative Baroque style, the construction of the church began in 1631 and was concluded after Longhena’s death, in 1687. Statues adorn the main façade and the outer sides of the building as well as the inside. The main altar is majestic in its size and is decorated by a marble group by Giusto Le Court. The Virgin Mary appears with the Child in her arms over clouds, puttos at her feet. An angel chases away the plague with a torch while a richly-adorned woman, Venice, reveres the Madonna.

Note: Le Court sculpted an allegory of the plague in the shape of a toothless old hag. Hence, the Venetian saying: you’re ugly as a plague!

The icon of Our Lady of Graces, also known as Our Lady of Good Health, was brought to Venice by Doge Morosini in 1670 from St. Titus Cathedral in Candia (present-day Heraklion, Crete). The XIII-century Byzantine plate is highly suggestive for the Madonna’s shadowy face and piercing eyes.

Note: Mesopandotissa is a Greek/Venetian form of Mesoipapantissa, an appellative of the Madonna that originated in Crete that used to signify the feast took place midway (miso) to the Ipapantissa, whose day of celebration is February 2. 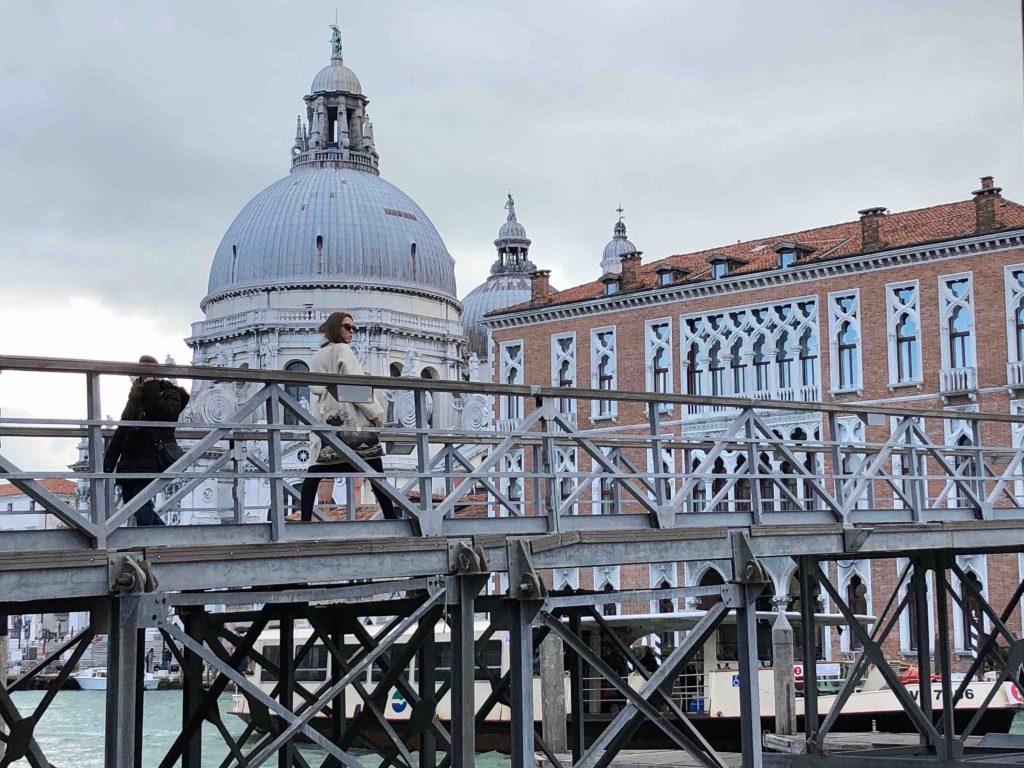 Pilgrims can reach the Basilica on foot via the votive bridge, a temporary bridge over the Grand Canal that unites Santa Maria del Giglio and the Basilica.

Note: A chance to see the palaces overlooking the Grand Canal from an unusual perspective. 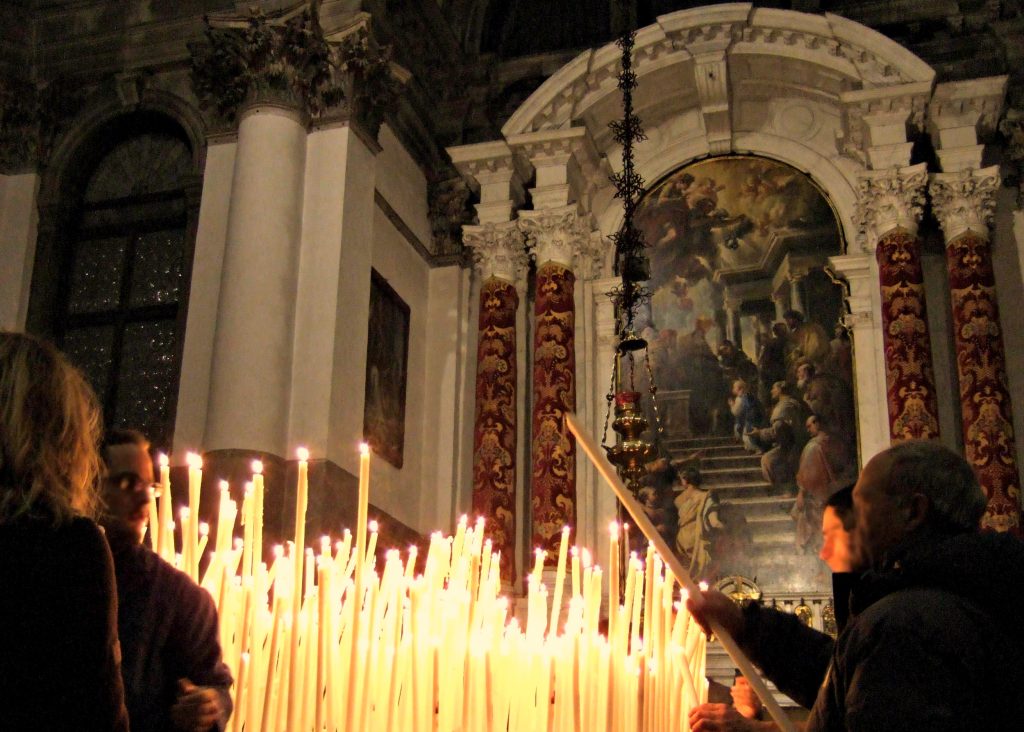 Venetians are very devoted to Saint Mary up to this day, and you can tell from the number of candles that during the Feast are lit in the church – more than all the other churches in Venice, combined, over a year. Tradition dictates the candles (any number, you get to choose how many) testify your devotion and your plea for good health.

Note: Candles are sold just before the Basilica. 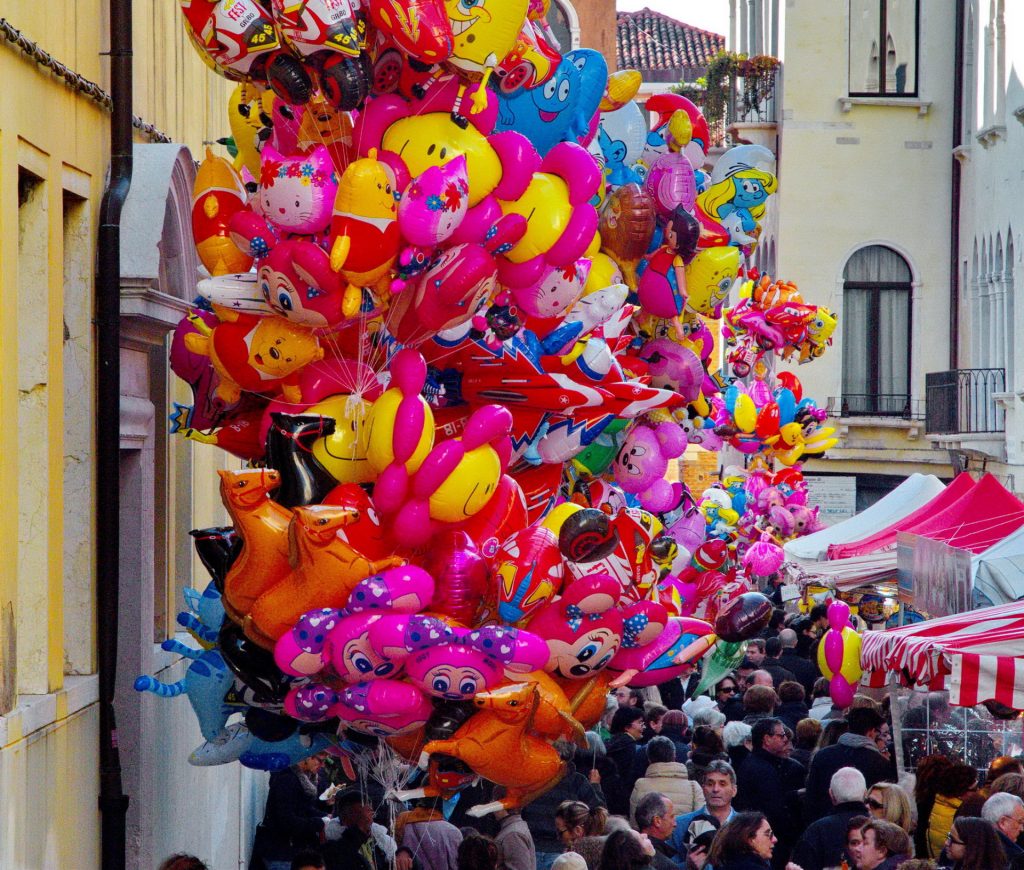 The sacred and the profane, as is the case with any religious feast, peacefully coexist. Stands sell candy, especially almond brittle and beignets and wait for you after church. Balloons and toys are available for the younger ones.

Note: Eat right away! Why wait? 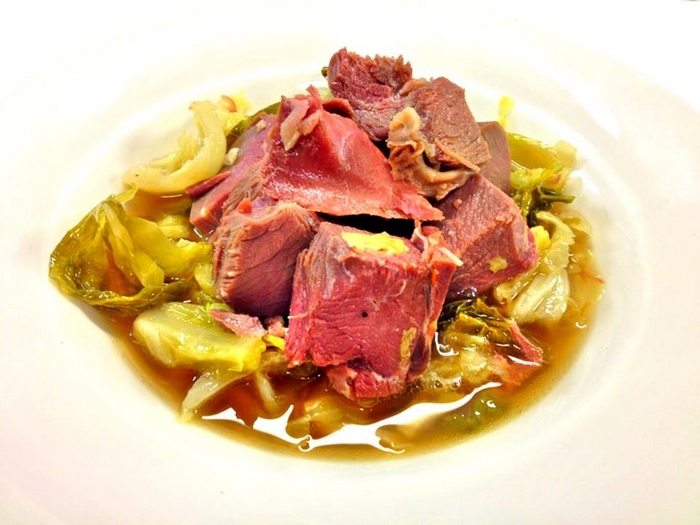 A plate of Venetian tradition, it is mutton chop, smoked and slow-cooked with savoy cabbage. An homage to the loyalty of the Dalmatians, who, in the long plague induced isolation of Venice, were the only one to send regularly supplies to town and feed the Venetians. Muttons are traditionally raised in their territories.

The taste of tradition

The Art of Gold

The ancient tradition of Venetian 'cuoridoro'