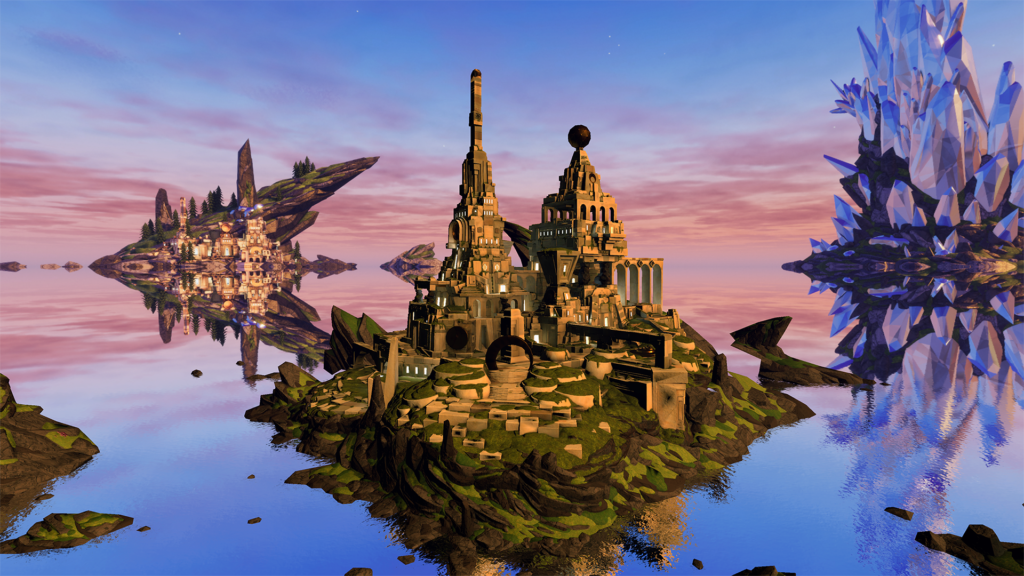 INTERACTION/CONSTRUCTION
«We make things, which in turn make us». This assumption, which is popular in creative theories of the ‘material engagement’ current, fits well the description of Shores of Loci, an interactive VR game presented out of competition in the Venice Immersive section. The game is jigsaw puzzle we will work on by materially assembling parts of objects that look like island worlds, similar to Miyazaki’s Laputa: Castle in the Sky. The pieces are so carefully crafted in every detail that we cannot help but reflect on the creative ability and the imagination potential that may exist in VR interactive environments. Is it possible to be creators within virtual worlds? When we build a house, do we build ourselves as users of said house? Do we achieve a particular status, different from the status of film audience? If it is true that the creative process is influenced by the material we use, what is our role as creators in the world of videogame? The raw material of code sees us as actors, more or less obedient to the device’s inner workings. The same happens in any art, to be fair. As we spend some time playing in the world of Shores of Loci, an offscreen voice invites us to use our imagination to reassemble lost words, and we create pre-determined shapes in return. And so do many other games that challenge us to build something. To make, to create, to build: all actions that modify the existent. Imagination itself is a way to interact with our world-environment. Virtual reality feels so true, even more so in this product (which is already available on platforms such as Oculus), but the code that determines the world-environment we act in is necessarily closed, technologically determined. We play by the rules, but the possibilities we have are mostly predictable, predicted by programmers or by artificial intelligence. The consequences are paradoxical: we act, but we cannot create anything that isn’t already there. That’s the point. To play by the rules is essential in games, generally, though even more so in videogaming. We accept the gratification that creation and re-creation offers us, and that is a key to appreciate the experience. We try to understand how immersive technology may or may not go beyond, challenge their own rules, open the code and allow the audience to really create something that wasn’t there before. Maybe a technological/aesthetical perspective that is yet to be researched.

SHORES OF LOCI
OUT OF COMPETITION
by Ellen Utrecht
(USA, 30’)